It was just an ordinary day Alex suprised me and gave me this two beautiful gift, a wallet and a pair of earrings. He chose a blue topaz stone because our anniversary is December. He knows what I want and things that can make me more happy and it makes my heart melt.
Posted by Dakilang Tambay at 8:24 AM 6 comments: 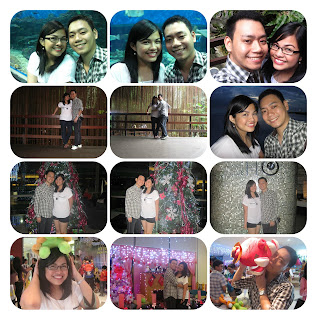 Very late post. We celebrated our first year anniversary at Manila Ocean Park last December 18, 2011. Even though some of the plans were messed up because he was not feeling well its still okay at least I spent my time whole day with him.

First stop, we went at SM Manila to get a haircut and eat early breakfast. I was planning to buy shoes but got lazy after. LOL. Second stop, Manila Ocean Park it was so happy because its my very first time to be here. Some of the comment said that its BITIN but I don't care. I want to see all of the sea creatures. Hihi. Some of the people in the park are kinda not civilized, want to know why? There are certain rules in the park that they do not follow. For example do not use flash camera because it will diatract the fishes but still others are stubborn and educated. Grrr. And then second they are taping the aquarium to make the fish moves. "sarap sawayin"

Anyway, he got sick and I took care of him the whole night that why when I got back to work on Monday, I'm so tired and sleepy. Good thing there's a free coffee in the pantry. Hihi.

HAPPY 1st YEAR ANNIVERSARY BABY! I LOVE YOU!
Posted by Dakilang Tambay at 6:54 AM 6 comments: